10 Hilarious Binary Jokes That Will Make You Laugh 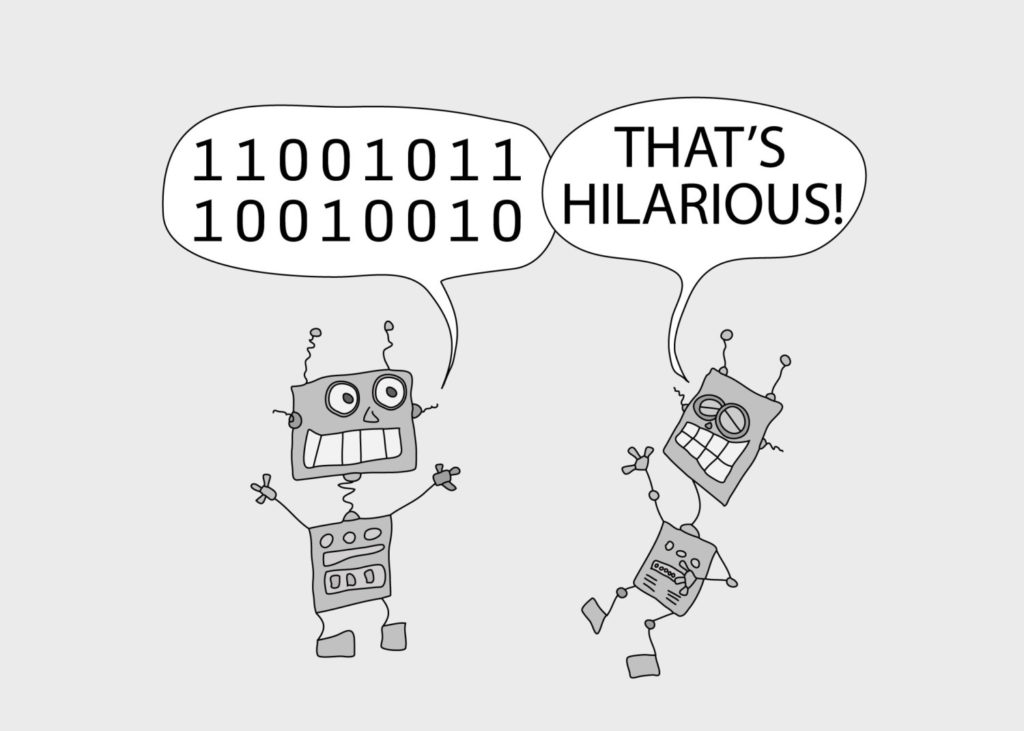 Check out these 10 hilarious binary jokes that will make you laugh so hard, you’ll see binary code!

A great way to have fun with binary code is to laugh at a few of the funniest math jokes rounded up from all over the internet.

Most binary jokes are a fun play on the fact that binary numbers have a different meaning in decimal form.

These jokes are fun among computer programmers, but you can also use them with your friends to make them feel dumb for not getting it!

There are only 10 types of people in the world – those who understand binary, and those who don’t.

The pun is that the binary translation for decimal digit 2 is ‘10’. Not decimal TEN, but a binary one-zero. Only people who understand binary code would know that, everyone else would be thinking there is a mistake in the joke! Head on over to the binary to decimal converter to convert 10 to decimal number system.

The other day I told my friend 10 jokes about binary.
Unfortunately, he didn’t get either of them!

When people sign up for a 101 class, it is usually a beginner-friendly crash course on a certain topic. The pun is that the binary 101 class was supposed to be easy. However, the decimal form for 101 is actually 5! So, the class turned out to be a level 5 class, and it was very hard!

Binary joke #5: “I wanted to become a programmer…”

I wanted to become a programmer, so I decided to learn binary code.
You could say I learned bit by bit.

When you want to become a programmer, the first numeric system to learn is the binary numeral system. Every binary digit is called a “bit”. The pun is that when the programmer learns bit by bit, they also mean they are learned binary digit by binary digit. Only the real programmers would know that! Everyone else will be none the wiser.

Why can’t Buddhists learn binary code?
Because they are at one with everything.

This joke is pretty simple. Binary means two, and Buddhists are all about being at one with everything. That means Buddhists can’t learn binary code! Get it? Haha.

I can speak 10 languages. English and Binary.

When you tell this joke, your friends will be waiting for you to list the remaining eight languages you can speak. But your joke is over and you’re telling the truth! You can only speak one-zero languages! Recall that 10 means 2 in binary code. Only the nerds will get it.

Would you like to try some binary cake?
Sure, I’ll have a little bit.

A bit is the smallest unit of storage in a computer. “Bit” is actually the short form for the words “binary digit”. A little “bit” is an ode to the fact that binary code uses bits, but a bit also means a little piece. The joke will fly over the heads of people who don’t know binary code, but the geeks will know.

This is a popular phrase based on a song by Jay-Z. The original phrase is to say “I’ve got 99 problems but binary isn’t one of them”.  The joke here is that 99 is converted into binary code to translate as “1100011”. Most people won’t get the joke, but people who have a hint about numeric systems will understand.

Binary joke #10: “A binary mathematician walks into a bar…”

A binary mathematician walks into a bar and asks for 10 drinks. The bartender says okay and gives him two beers.

This is a great addiction to “A man walks into a bar…” type of jokes. When a binary mathematician asks for drinks, you have to be careful when taking his order, lol! 10 drinks is a lot of drinks, but the bartender appears to know binary code so he gave the guy two beers. Remember that 10 is binary code for number 2.